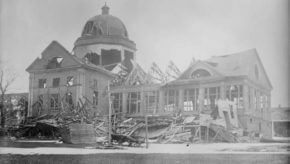 On December 6th, 1917, the city of Halifax was devastated by an explosion. The SS Mont-Blanc, fully loaded with wartime explosives, accidentally collided with the Norwegian SS Imo in the Halifax Harbour. The city was flattened. Two thousand people died and thousands more were injured. The city would have to be rebuilt and the company received its largest single brick order to date.